It is 6:44 a.m. on 12th July. A public holiday in Northern Ireland. Why am I awake this early on a holiday? I do not know. It’s not out of excitement anyway as we do not plan to stray far from home today. Because for those of you who do not know today is a big day for our little country. Well a big day for half of our community. The other half tend to dread it and wish it was all over for another year.

On 12 July 1690 the Protestant army of King William of Orange defeated the Catholic army of King James on the banks of the Boyne River near Drogheda. Ever since Northern Ireland loyalists have celebrated this victory over their age old enemy by holding band parades across the country. They view these as a celebration of their culture and their fundamental human right to mark a significant historic and religious event. 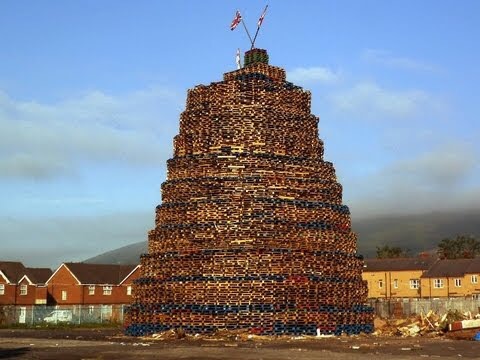 Nationalists, however, view the parades as naked triumphalism. A deliberate attempt to provoke the other side of the community via an antiquated event that celebrates sectarianism and bigotry as opposed to history and culture. Whatever way you look at it this is always a tense time of year and in the past has been marked by large scale public disorder which has stretched our forces of law and order to the limit.

I can see both sides of the coin. I was born a Presbyterian, a member of the Protestant community. I went to a Protestant church, attended a Protestant school and had only Protestant friends. My grandfather and father were both members of the Orange Order. This did not make them bad people as the majority of ‘Orangemen’ are decent, law abiding citizens.

I was not truly exposed to the ‘other side’ until I left home and went to university, aged eighteen. There I was given the freedom to make my own mind up. I discovered that Catholics were not the enemy, rather ordinary human beings just like me. At college most of my friends were Catholics and this continued into my working career. I married a Catholic girl who is probably the most open minded person I have ever known. She hasn’t a bigoted bone in her body.

So I can see the good and bad in both communities. The large majority on either side want to live in harmony and peace. They want to move on from the legacies of hatred and violence that scarred our country during ‘The Troubles’ of 1969-1988 which left over 3,600 dead and many more physically and emotionally damaged.

The loyalist side of the community, as part of their celebrations, light bonfires across the country on the eve of the parades. These ’11th Night’ bonfires seem to get larger each year as rival loyalist areas attempt to outdo each other. To the extent this year that residents are genuinely worried for their safety should one collapse and fire fighters traditionally prepare for their busiest night of the year.

I see little to celebrate about these bonfires. They are usually accompanied by loud music, drunkenness and anti social behaviour. Fire crews and police are attacked as they try to keep the peace. The flag of the Republic of Ireland is set alight along with images of nationalist politicians and religious leaders. They are bonfires of hate.

As a historian the 12th celebrations intrigue me. As a spectacle they are colourful and vibrant. The Orange Order has done much to turn them into a family event and a tourist attraction. But the bonfires and the behaviour around them show what lies just beneath the surface. They are bonfires of hate whose purpose is to antagonise and divide.

My prayer on this holiday is that these bonfires of hate are replaced by bonfires of love across our still divided land. Not towering, physical monstrosities but fires that spark and alight in people’s hearts. Fires that spread through families and communities. Fires that rage with an intensity that wipes out every trace of our bloody past. Fires that burn down the barriers of suspicion and misinformation that still keep the two communities apart.

Catholic? Protestant? Many masquerade under these religious titles in order to promote their most definitely non Christian agendas. But many more are genuine followers of Jesus who do not want their children to live through the horrors that they endured growing up. When Christianity first burst outwards from Jerusalem two millennia ago it spread like an uncontrollable wildfire through the then civilised world. This Holy Spirit fuelled explosion could not be extinguished. And at its core burned a white hot love.﻿

I pray that this fire rages across Northern Ireland today on a tidal wave of love. And I pray that God uses you as a conduit to spread that same fire throughout your sphere of influence.

1 John 4:18 – ‘There is no fear in love. But perfect love drives out fear, because fear has to do with punishment. The one who fears is not made perfect in love.’

What do you know about the 12 July tradition in Northern Ireland?

What is the largest bonfire you have ever seen?

What can you do today in your community to spread the white hot love of Jesus?’