Going waaaaay back some of you might remember a post I wrote called ‘Maggie’s Story’ (not her real name) about a young, homeless girl I befriended in Belfast last year. If not, you might want to check it out before reading on as it provides context for today’s post https://afracturedfaithblog.wordpress.com/2017/06/29/maggies-story/

I hadn’t spoken to ‘Maggie’ in some weeks but wasn’t particularly concerned. As is the nature of life on the streets she lived an unpredictable and chaotic existence. Some weeks she would be everywhere I looked whereas at other times she would literally vanish into thin air. I would never ask her where she had been. That was none of my business. She told me what she wanted to tell me.

I was always relieved, however, to see her after such absences. Yesterday was no exception. I was walking across the city centre from the office to the train station. My normal route involves cutting through a shopping centre (mall) which brings you out onto the most eclectic of squares where modern cocktail bars and restaurants sit alongside centuries old chapels and more traditional watering holes.

The square itself is approached from all sides by a series of cobbled, twisted alleyways where you often find city street dwellers. And it was here that I discovered Maggie sitting shivering beneath a worryingly thin blanket. She was as pale as an anaemic ghost, entombed in her regulation street uniform of hoodie and tracksuit bottoms. She looked cold and miserable but her blue eyes were startlingly clear. I knew immediately that she wasn’t using. I can always tell by her eyes.

When she saw me, those eyes lit up and her face broke out into a smile. A smile which made my day. ‘Where have you been?’ she enquired, totally oblivious to the fact that I walked this route every day and she was the one who had been missing in action. We engaged in conversation for a few moments, the details of which are irrelevant to this post. Needless to say her January had been a tough one. But she was alive and clean for which I was grateful. 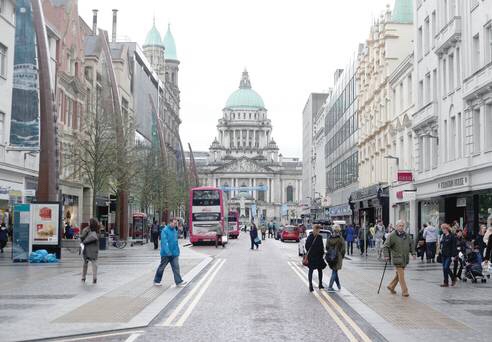 As I crouched beside her I became aware of a young woman kneeling beside me. It was her flaming, red hair that first caught my eye. She started to talk to ‘Maggie’, her face etched with concern and worry. She told us that she had only recently moved to Northern Ireland from the United States and had lived on the streets in Los Angeles as a teenager. She then did the most remarkable of things, removing her coat and handing it to ‘Maggie’. ‘You’re freezing and you need this more than me’ she explained.

I don’t know who was more shocked, ‘Maggie’ or myself but there then followed a bizarre reverse tug of war between the two girls. ‘Maggie’ is fiercely proud when lucid and very reluctant to accept charity. She will never say no to a hot cup of tea and I have also persuaded her, after much effort on my part, to allow me to buy her food and cigarettes. ‘But only the cheapest brand. You do enough for me as it is’ she would holler after me as I entered the shop.

In all the time I have known her, however, I have never once considered giving her an item of my clothing. I was instantly shamed and humbled by this staggering act of kindness. The American girl, let’s call her ‘Abby’, looked cold herself and I could almost count the goosebumps popping up on her pale arms as she struggled to get ‘Maggie’ to accept her coat. Belfast is hardly Sunset Boulevard in deepest January I reflected, cosy in my heavy coat, cap, scarf and gloves. Yet here she was offering up her coat to a complete stranger who she knew needed it more than her.

The tug of war continued and I assisted where I could in translating West Belfast slang with Southern California drawl as best I could. They were both speaking English but struggling to understand each other. In the end ‘Maggie’ triumphed (she normally does) although she allowed ‘Abby’ to buy a cup of tea for her. I thanked the American girl afterwards and we talked a little as I filled her in as to what I knew about ‘Maggie’.

She screamed ‘Young Christian’ in her language, actions and dare I say it appearance. She looked as if she had just walked off the set of a Bethel worship music video. I’m not sure how but our brief conversation led to her asking what place of worship I attended. ‘I’m kind of between churches’ I mumbled, a bit embarrassed to admit as much to such a paragon of virtue. ‘What about you?’ I replied, bracing myself for a Christian CV as long as your arm. No doubt the daughter of a pastor, worship leader aged ten and veteran of countless global missions and city soup kitchens.

‘Oh I’m an atheist’ she cheerfully replied before saying her farewells and veering off into a nearby cafe in search of ‘Maggie’s’ tea. I stood there, my jaw scraping off the ground, in stunned silence. Here was a non-Christian performing perhaps the most ‘Christian’ act I had ever witnessed. A modern day Good Samaritan. In the space of five minutes she had shown more love and compassion than I had seen many devoted church goers display in five years.

Christianity is just a word, a tag, a label. It means nothing really. It is actions that make the person, not memorising Bible verses or rolling up to church every Sunday. The word ‘Christian’ was nothing more than a nickname given to the first followers of Jesus by the Romans. It was intended as derogatory, mocking term. The early followers referred to themselves as ‘The Way’. The three year ministry, death and resurrection of Jesus paved the way for the early church to explode onto the global scene and bring the mightiest civilisation known to man to its knees within a few centuries.

Atheist, Agnostic, Christian at the end of the day it doesn’t matter. They are nothing but labels. What defines us is love. Do we love those around us? Not just our family or friends but also those on the fringes of society? We need to radically rethink the ingrained stereotypes and prejudices which colour our view of the world. We need to stop judging others and shoving them into neat little compartments which tally with our outlook life. We need to value and include the ‘Maggie’s’ and ‘Abby’s’ of our lives. We need to love the homeless and the atheists (but we also need to love like the homeless and the atheists. Actually love as opposed to just talking about it.

Who are you going to love today?

60 thoughts on “The Atheist Angel”