Well that was an exciting St. Patrick’s Day. Ireland defeated England 24-15 to win the Six Nations Rugby Championship and the Grand Slam in the process. This is a massive deal over here as the country is rugby mad. And it’s always satisfying to beat the English at anything. Ireland are now ranked second in the world at rugby ahead of England, Australia, South Africa, France and Wales to name but a few. Not bad for our tiny little island. Roll on the World Cup in Japan next year.

I posted earlier today asking for your questions on life in Ireland. I received a LOT and have replied to some of them already. But hopefully this post will answer a few more. We live in Northern Ireland which comprises Counties Armagh, Antrim, Down, Fermanagh, Derry and Tyrone. There are 32 counties on the island of Ireland and the other 26 comprise the Republic of Ireland. So basically Ireland is divided into two countries with different governments, currencies and customs.

The island was divided up this way by the Act of Partition in 1921 which followed the Irish War of Independence (1919-1921). Northern Ireland was created to placate its largely Protestant population who sought to remain part of the United Kingdom with England, Scotland and Wales. They regard themselves as British as opposed to Irish and swear allegiance to the British monarch. Queen Elizabeth II is monarch of Great Britain and Northern Ireland.

This section of the Northern Irish population regard themselves as pro-union or Unionists. The Catholic population by and large want a United Ireland free of all British influence. They are known as nationalists or republicans. Political life in Northern Ireland is largely drawn along these religious lines. The two largest parties are the Democratic Unionist Party (unionist) and Sinn Fein, pronounced Shin Fane, (republican). Protestants largely support the former while Catholics vote for the latter.

Following the partition of Ireland there were a number of violent conflicts where republicans sought to overthrow British rule in Northern Ireland. The bloodiest of these was between 1969-1998. This period ,known as ‘The Troubles’, resulted in over 3000 deaths as the Provisional Irish Republican Army (PIRA) launched a guerrilla campaign against the British Army and Northern Irish police force, the Royal Ulster Constabulary (RUC). Loyalists retaliated with the formation of their own paramilitary groups, most notably the Ulster Defence Association (UDA) and Ulster Volunteer Force (UVF).

Many innocent men, women and children died during the Troubles as a result of countless shootings and bombings. Peace was finally reached via the Good Friday Agreement in 1998 but a number of breakaway republican groups refused to accept the terms of the agreement and continued the armed struggle. The single largest loss of life in Northern Ireland was when the ‘Real’ IRA detonated a no warning car bomb in my home town, Omagh, on 15 August 1998, killing 29 civilians and two unborn babies.

Below is a photograph taken by tourists minutes before the bomb detonated. The bomb car is in the background. Notice how low the car’s suspension is sitting to the ground. That’s the weight of the explosives weighing it down. Chilling, isn’t it? 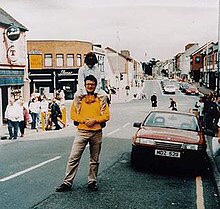 I wasn’t in the town that day but my parents were. Thankfully they were at home and not in the town centre. It is probably the rawest, personal experience of the conflict I have. The bomb exploded on a street I have walked along hundreds of times. Fionnuala grew up in Belfast during the Troubles and has similar stories of carnage which happened literally around the corner from her. The violence is largely in the past now although deep divisions still exist between the two communities.

I was raised a Protestant and Fionnuala a Catholic. Many people disapproved of our marriage, including my parents. Old wounds heal slowly. We are seeking to bring up our children with an understanding of our country’s past and the struggles we both faced growing up in ‘The Troubles’. We regard ourselves as non denominational Christians who are neither ‘Protestant’ or ‘Catholic’. We now live in a modern, vibrant country but the legacy of violence is hard to shake off. A lot of people refuse to move on and you often don’t have to scratch too far beneath the surface to reveal the old prejudices and bigotry.

Some of you will know that I’m currently writing a novel. It is set in modern day Belfast but there are several ‘flashback’ chapters which focus on the main character when he was a young boy growing up during ‘The Troubles’. His experiences then explore a number of issues which I have touched upon above. I hope this post has been of some use and taught you a little more about our country and heritage.

Have you any Irish blood?

Has this post assisted you in your knowledge of Northern Ireland and it’s troubled past?