I write this from our bed. I’m not so sure about getting up as I’m not so sure I will be able to. I completed the 21 mile training run yesterday. Somehow. It was not a pleasant experience. I knew from the first mile something was not right. I felt like I was running flat out but my time didn’t reflect it. My legs were okay but my arms and upper body were drained. I had nothing to offer. By mile 4 I was visibly slowing. The panic button pressed, I plugged on thinking it was a blip and I could run through it.

It wasn’t and I couldn’t. By mile 7 when I had my first drinks stop I seriously considered stopping but my stupid pride wouldn’t let me. I soldiered on and the situation improved slightly. I was still hating every step of it but my mile splits stabilised and I was able to hold a steady, if highly unimpressive, mile pace. The heat wasn’t helping. Only an idiot would schedule their longest run of the year on the hottest day of the year. I was that idiot.

At 14 miles I had my second drinks stop and rued not having bought energy gels for today. My pace was the same but I was dreading the final section. And rightly so. By mile 17 I was running nine minute plus miles and the slightest gradient felt like Everest. An elderly lady pulled up alongside me in her car and asked was I okay. I mumbled that I was alright, then remembered my manners and thanked her for stopping. I imagine she could have ran faster than me at this point.

I stopped greeting passing walkers and cyclists which is most unlike me. Motorists waved at me and I had no idea who they were. If Katy Perry had been standing at the roadside by an iced lemonade stall I would have grunted at her and staggered on. The last two miles included a couple of sizeable hills. An old sheepdog lying in the shade looked on in pity as I waddled up the first. By the second I had lost the will to live. My form and rhythm had totally vanished. It was just a matter of getting to the top.

The last mile back through the village should have been a victory parade but turned into a death march. The German retreat from Stalingrad was a cheerier experience. I willed my Garmin watch to read 21 miles and counted the seconds down. I refused to walk even though my normal walking pace was probably quicker than I was managing at present. My last mile was an embarrassing ten minutes. But then finally it was over.

I’m not sure what went wrong. The heat certainly played a factor as did the busy week at work I had just finished. I also had a nasty eye infection which must have taken its toll. I should have had energy gels as well. On the plus side I completed the run and still somehow ended up a minute inside four hour marathon pace. So all was not lost. Plus if you are going to run a stinker then you might as well do it during a training run as opposed to on the big day itself.

That said my confidence has taken a blow. I don’t think I could have finished a marathon today. At 21 miles I was gone. Out on my feet. I will be better prepared and rested on 7th May. Hopefully it will be cooler and my plan to run alongside a pacer surrounded by other runners will hopefully help. I know the course and know I can complete it. The crowd and the adrenaline will hopefully drag me along as well.

My taper commences now with the race just over a fortnight away. I will focus on reduced mileage combined with a healthier diet. When I’m flat out at work I tend to eat all sorts of rubbish. Running is a great leveller. Just when you think you are on top of your game the wheels tend to come off. I’m going to try and get out of bed now. Wish me luck. If you hear muffled screaming you’ll know who it is. 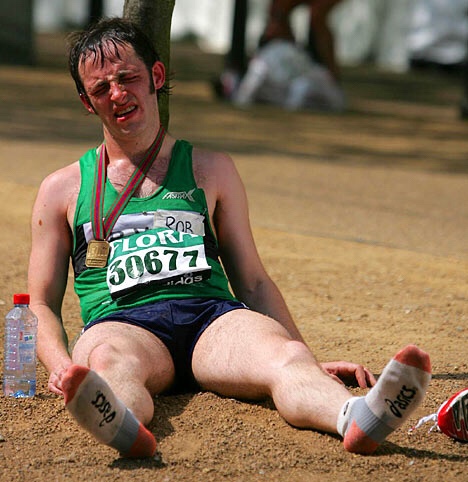