When I was aged around 12 I developed a facial twitch. The severity and frequency of this twitch would depend upon my anxiety levels at any given moment. I was a painfully shy and insecure young boy so it will come as no surprise that I was bullied at school about this by my peers. It was not the most intense or vindictive bullying I have ever witnessed but it had a massive impact upon me which I still carry to this day.

All I wanted at school was to be accepted and to fit in. My twitch, combined with my shy nature and chubby, unsportsmanlike physique, ensured that I did not. I was a geek, an outcast, not one of the ‘in crowd.’ I firmly believe that this is the reason I grew up with such a brittle, malleable personality. I have always been a people pleaser even if this has meant sacrificing my own beliefs and values in the process. I would always say yes even when every fibre in my body was screaming no.

This led to me getting into a lot of hot water in later life; hot water that almost scalded me alive until I was plucked from it at the eleventh hour. I kept bad company which led to bad behaviour. This has been a constant and recurring theme throughout my adult life. It is only now, many years and many wounds later, that I am learning to be more cautious when I approach new situations and people. I no longer dive in with both feet, wanting to be everyone’s new best friend.

I have to be constantly on my guard. The next disaster could be just around the corner. Fionnuala is a massive help in keeping my feet firmly rooted to the ground. She sees the warning signs long before I do and warns me accordingly. It is so easy to effortlessly slip back into old habits. The transition can be almost imperceptible, an osmosis that creeps up on you and before you know it – BANG – you are right back at the bottom of that slippery slope it took you so long to scale in the first place.

Here’s an example. Today I took my seat on the train for the daily commute into Belfast. Sitting opposite me was a middle aged lady. I paid little heed to her and started to read my book whereupon I noticed her head jerk ever so slightly. Then again a few seconds later. And again. I realised that the poor woman had a similar nervous tic to the one I had eventually grown out of all those years ago.

Within a few heartbeats I was transported back to my childhood self and gripped by an overwhelming urge to replicate the lady’s actions. It was as if my head was in a vice and the only solution to the compulsive thought was to succumb to it, to surrender to the urge. I was gripped in a panic and tempted to run out of the carriage, anything to escape the ghosts from my past.

I didn’t of course. I sat where I was, gritted my teeth and waited until the urge passed. And when it came to my stop I got off the train and carried on with my life. My exciting, vibrant, present life a million miles detached from those unhappy childhood memories. The incident left a lasting impression upon me and an itch that could only be scratched by writing about it. A lesson was learned on that train this morning.

I can never become too comfortable. I can never rest on my laurels and think that I’m invincible to my former flaws and weaknesses. All it takes is one slip, one stumble and I’ll be back to square one. I am still weak, still impressionable, still oh so easily influenced. If I can almost relapse following a brief encounter with a stranger on a train what hope would I have when confronted by larger, more vicious demons from years gone by.

Do you still fear the ghosts from your past?

How do you fight them? 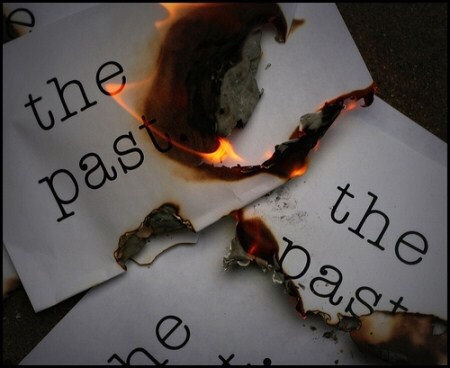 24 thoughts on “Ghosts From The Past”