Good Morning. I have a busy, but exciting day, ahead. I’m on the 06:13 train to Belfast, a full 90 minutes before my normal one. The reason? I have a big meeting to attend this afternoon, so want to get in early to prepare for it. A three hour meeting, no less, where I will be bombarded with questions by our senior management team. I need to look smart and think smart. All prayers and kind thoughts would be much appreciated.

The 07:48 express to Belfast is normally standing room only, as we are crammed into carriages like claustrophobic sardines, thanks to the good people of Northern Ireland Translink who resolutely refuse to put on extra carriages as that would ‘cost too much.’ It reminds me of one of those trains, you see on the Indian sub-continent. Next thing they will be charging folk to sit on the roof.

The 06:13 is an entirely different experience. It was empty. I had my pick of the seats, indeed I almost had an entire carriage to myself. I’ve heard of the early bird catching the worm but this is ridiculous. It was a veritable ghost train, hurtling through the darkness towards the bright lights of Belfast. Getting up early was hard this morning, but I reaped the reward. It was worth the struggle and effort on my part.

Of late, my faith has been a little bit like my train experiences. For a long time, I’ve been lazy. Not physically, but rather spiritually. I’ve been quite content to go with the flow, and drift along with the masses. I’ve done the bare minimum with regards my prayer life and Bible reading. I’ve turned my back on Christian fellowship and run a mile from anything remotely resembling a church.

I’ve become a zombie. I walk, I talk, I breathe. On the exterior, I give all the signs of being a perfectly normal, functioning human being. But inside, I have been dead. My faith has shrivelled up, a dried husk desperately in need of hydration and cultivation. I have succumbed to old habits and allowed my OCD to read its ugly head once more. I have chosen wrong paths and made poor decisions. I have taken the easy option and boarded the wrong train.

You will never be short of company on the wrong train. For it’s where the majority of us, end up at some point in our lives. You might have been on it recently, or indeed are travelling on it as I write this now. It’s the easier option, but an altogether less pleasant alternative. It’s taking you to the same destination, but in a very different manner. Your legs ache and fellow commuters elbow you in the ribs. It sucks.

The ghost train involved a little more effort, but is worth it. You travel in more spacious surroundings. It’s the train you need to be on, the train that your loved ones need to be on. Yet, it’s virtually empty. I’m going to be making a greater effort in the future to consistently board the ghost train. You can even call it the Holy Ghost train….did you see what I did there. Sorry, got a bit carried away there.

What train are you boarding today? Are you taking the lazy option, are you switching off and backing down, when you need to be switching on and stepping up to the mark? I would encourage you to join me on the ghost train today. I could sure do with the company and I’ve saved you a seat. It sure beats spending your commute with your nose shoved into a stranger’s armpit.

What train are you boarding this morning?

What’s been your worst commute to work? 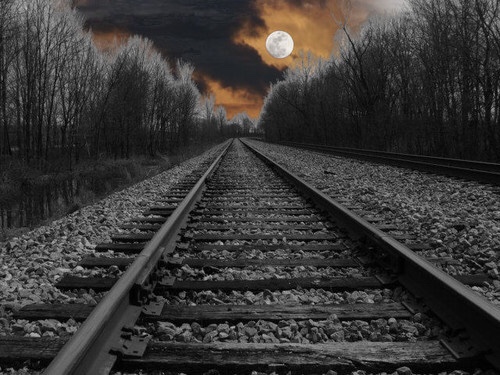 44 thoughts on “Are You On The Right Tracks This Morning?”