Have you ever noticed how the fantasy and science fiction genres are grouped together, like salt & pepper or bread & butter. Many see them as a seamless combo, and that fans of one genre will automatically be devotees of the other. I love fantasy. I was raised on Tolkien and his tales of hobbits, orcs and dragons. But here’s the deal, huddle round closer and don’t breathe of a word for this is strictly between you and I….

Gasp! Shock! Horror! Before I’m hung, drawn and quartered I’ll try and explain myself. Or rather I won’t for, if asked, I’m unable to put my finger on the reason why. I love escapism and unreal, futuristic settings. Give me a post apocalyptic movie and I’m as happy as Larry….whoever Larry is. I say yes to the sinister, the supernatural and the paranormal.

Zombies are my favourite ever big screen invention. Until they are invented, that is. For they are coming. Oh yes. But as for Chewbacca and R2D2. I’m just left cold. I watched the ‘Star Wars’ movies when I was a kid. But I didn’t fall in love with Princess Leia, I didn’t much care for what happened Han Solo and as for C3PO? Well, I found him incredibly irritating. To the point where I was rooting for Darth Vader and his armies of stormtroopers.

Then there’s Star Trek. The following will probably have some viewing me as a heretic and furiously hitting the unfollow button. So be it. But I never much cared for the original TV series. William Shatner’s acting was beyond hammy and the naff sets and special effects haven’t aged well at all. Leonard Nimoy raises an eyebrow and everyone goes into convulsions of ecstasy. Sorry, not my cup of tea.

I haven’t watched any of the current strain of ‘Star Wars’ or ‘Star Trek’ movies. I watched ‘Men In Black’ but it left me cold. Battlestar Galactica? Nope. The only possible exception is ‘The X Files.’ I was obsessed with Mulder and Scully. Then they kissed and everything was ruined forever. Did I tell you about the time I saw Gillian Anderson in Belfast? Oh ok, I’ll save that story for another day.

So, I’m throwing it out there to you lot. Are you happy with the SF & F genres being lumped together? Have elves & vulcans got more in common than I first thought? Would you foam at the mouth with disgust or delight if Gandalf appeared on the bridge of the USS Enterprise in some bonkers Hollywood LOTR/Star Trek crossover. As ever, leave your comments below. I’m looking forward to reading your thoughts. 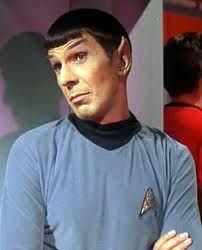