The written word is a smoking gun. It leaves clues, drops of blood that we follow pitter, patter to the scene of the crime, the grisly truth. A crime scene is an oasis of silence, a deadly dearth, until life explodes upon it. Raised voices, orders tersely barked, the click, whirr, click of the photographers lens. It lies before us, to intrigue and disgust in equal measure. An opulent opportunity to discover what really happened.

DNA, fingerprints, a single strand of hair. A discarded apple core. Every inch of ground pored over in microscopic detail for the ethereal evidence we so desperately seek which is right there, staring us in the face. If only we can find the key to unlock it, to throw back the latch and reveal the light. To lead us to the killer, see justice prevail and restore calm and order, separate right from wrong.

Such it is with our words. What does he mean? Who is she talking about? We second guess and speculate. Is it me, is it him, so and so or what’s his face? The author beguiles and intrigues, smoke and mirrors, scents and shadows. My words mean everything, my words mean nothing, the fickle strokes of a pen on the page building worlds and destroying empires on a lazy whim.

The ideas, they keep coming. An endless procession of plots and characters, hurtling round my mind, begging to be released. They are my then, my now, my not so happily ever after. My past becomes the currency of my future, I’ll pay the toll and take my chances. So much to write, yet so little time. Shackled by the weight of the daily grind, the 9-5. Bills to pay, when all I want to do is tap, tap, tap these characters into being.

Soothing words, brutal words, words of hope and hopelessness. I am a prisoner to them, they will not release me, until I birth them, gagging and choking onto the harsh glare of the keyboard screen. They haunt the inner recesses, demons from the past gorging on the success of my present situation. Dare I let them out for where they dwell, chaos follows close behind. They destroy all they survey.

The written word is a smoking gun. Bag it, tag it, you’ll never get to the bottom of it. A conundrum of could be and what if? It drives me forward, day by day to where I do not know. Will you join me on this journey for I know not where it ends? Words kill like guns, another darling bleeds out from my fingertips. Every contact leaves a trace, a trace of what could have been.

Follow the clues, follow the words. Down the rabbit hole, through the looking glass, we know not where it ends. Life or death, the flick of a coin, I write on the edge, and none of them are safe. Nobody is safe when I’m in the zone, when I lift the yellow tape and take in what I have created. The bloody, magnificent madness of it all. I am what I am and what will be, will be. Que sera sera, tick tock, adieu.

My characters sleep with one eye open for I am coming for them, a literary assassin. My pen is a blade, the prose spattering the page like an arterial spurt dancing across the watching wall. Look close at those random patterns of life extinct, look closely, can you see yourself? Or is it merely a trick of the light, an illusion of your desire. Time will tell, the truth will out. Every crime scene leaves a story. This is mine. 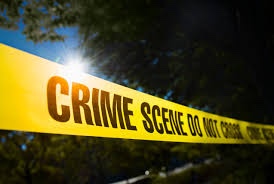 15 thoughts on “Thoughts From A Crime Scene”