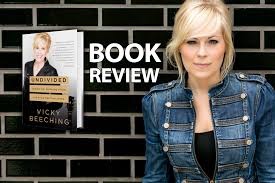 I’ve just finished reading ‘Undivided’ by Vicky Beeching, a memoir of her life as a Christian singer/songwriter who played to thousands on both sides of the Atlantic until declaring she was gay a number of years ago. It was a moving, challenging and ,at times, unsettling account of the experiences of one woman within the evangelical church movement. One that left me saddened and inspired in equal measure.

Vicky knew from 13 she was gay but hid her sexuality from family and friends as she was raised to believe homosexuality was sinful and depraved. The early chapters tell of her struggle to serve and worship God through her music while battling to cope with the shame and guilt she felt at her sexual orientation. As a teenager she was told by ‘well meaning’ adult Christians that her sexuality was as a result of being possessed by demons.

She studied theology at Oxford, while continuing to develop her musical talent by playing major Christian conferences and festivals throughout the U.K. This attracted the attention of a leading American Christian record label. Before she knew it Beeching was based in Nashville, recording albums and playing at megachurches and stadiums where she regularly sang to crowds in excess of 20,000. She became the poster girl of Christian contemporary music.

Throughout this time, while outwardly living her dream, Vicky was sinking into an ever deeper trough of depression. Lonely and unhappy, she travelled across the States battling fatigue and jet lag, while unable to disclose her true self to another living soul. She was part of a community where elements professed extreme homophobic thinking and behaviour based upon their interpretation of the Bible.

Vicky eventually ‘came out,’ aged 35, when she could conceal her sexuality no more, given the impact it was having on her physical and mental health. Diagnosed with scleroderma, fibromyalgia and ME, she was also treated for depression and anxiety. Upon coming out, her performing and recording career ended overnight and she was inundated with hate mail and death threats from the evangelical Christian community.

Despite this, Vicky rebuilt her life and, while still struggling with extreme exhaustion, has established herself as a successful writer, columnist and social commentator. She is an influential mental health advocate and is fighting for the church to adopt a more open minded, inclusive and loving attitude towards gay and bisexual people. Now working towards her Phd. in Theology she argues that the Bible is a living document of mystery and revelation.

Throughout the book, Vicky Beeching comes across as a likeable, intelligence and sensitive young woman who grew up wanting nothing more than to share her love of Jesus via her music. Her message is one of love and acceptance, which contrasted starkly with some of the brutal attitudes and behaviour she encountered in the evangelical movement. How she emerged on the other side with her faith intact is testimony to her deep relationship with God.

I really connected with this book, even though I’m a heterosexual male who will never have to endure what the author did. Her story makes my own negative church experiences pale into insignificance. Church goers talk about walking in the footsteps of Jesus, but how many actually do? We are instructed to be the light of the world and to love unconditionally. The Vicky Beeching story tells me we all still have a very long way to go.