I’m relaunching my serialised story, ‘Bomb Girl.’ Chapter 5 will be posted later this week but for those of you who haven’t read it here’s Chapter 4, with a link to Chapters 1-3 at the bottom. Enjoy and please let me know what you think.

Dark chocolate. Darker thoughts. Ariana chewed thoughtfully on a chunk of her bar as she stared across the river towards the main university building. Seated at her desk, she groaned and pushed away the opened text book which had proven utterly impenetrable to her for the past twenty minutes. Was it just her, or did her class mates struggle just as much with the reading list she had been valiantly battling through since the start of term? There was little point asking Tess, whose attention span barely allowed her to consume a Kardashian tweet, let alone a 450 page tome on post-war Europe and its fragile fledgling economy.

Her room was small and plain, but to Ariana it was freedom. Freedom from Monksbridge and the stigma which had hung over her like an obstinate rain cloud, these last eighteen years. She had a bed, desk, books and most of all it was all hers. No intrusions, no being checked on every five minutes, no curfew or 50,000 questions every time she opened the front door. She could go where she wanted, when she wanted and with whosoever she wanted. Not that her social diary was overflowing with engagements. Her conscious decision to fly under the radar was a constant source of irritation to the limelight hogging Tess.

‘Be careful how low you fly, my dear Ariana. We don’t want you clipping the ground and bursting into a ball of flame.’

Ariana winced, altogether unconvinced by her selection of chocolate. She reluctantly forced down the piece she was chewing on, before picking the remainder of the bar and lobbing it towards the overflowing metal bin in the corner of the room. It ricocheted off the rim, before settling on a crumpled mass of clothing where it balanced precariously next to a rolled up pair of unwashed socks. Another luxury of the student lifestyle.

‘For God’s sake, Ariana, your room is a pigsty. I want it cleaned, cleaned do you hear me. Or you know what’s coming.’

Ariana shuddered and shook her head, shutting the venomous voice our of her head. Most days it lay dormant but, occasionally like just now, it would squirm free and wriggle past her mental defences, whispering accusations and false truth into her ear. Stupid chocolate, she thought, what had possessed her to buy it. She hated dark chocolate, always had. Yes, student life was all about experimentation, but she knew what she liked and that was that. Plain Jane, under the radar, forever and ever, amen.

Plain Jane. Hallowed be thy name.

Ariana jumped, the squawk of her mobile phone dragging her back to the present from the introspective pity party. She peered at the screen although she already knew who it was from and what it was about. Tess.

‘I’m outside the Union. Where are u? U better not still be in that bloody library? 😡‘

Ariana smiled, before picking up her phone and tapping out a suitably pithy response.

‘And what if I was? You’d never find me as you don’t even know where the library is?’

Her finger hovered over the 😊 emoji button, before she thought better of it. Ariana didn’t do smiley emoji, in fact she didn’t really do smiling at all, despite the best efforts of the eternally effervescent Tess Cartwright.

‘Remind me we have to work on your sense of humour in addition to all ur many other social inaddequacues. Hurry up!!’

‘I’ll be there ASAP. And it’s inadequacies.’

‘Whatever swotty pants. Just hurry up. The cider calleth.’

Ariana tossed her phone onto the bed and frowned at the floor, where the majority of her wardrobe currently lay. She eventually settled on a regulation pair of black leggings and formless green woollen jumper she had picked up in a charity shop the week before last. She decided against taming her mop of dark curls, a losing battle if ever there was one. Besides, the earache she would receive from Tess for being any later than she already was just wasn’t worth the hassle.

‘Are you going out looking like that? Why can’t you wear a nice dress? You look like a boy, and a not particularly handsome boy at that. You could be so pretty, if you’d only make the effort.’

Twice in one day. Ariana froze, hand outstretched to grab her phone from the desk. She had finished her last prescription ten days ago and resolved she was going it alone this time. She was finished with pharmaceutical crutches, another Monksbridge hangover she no longer wanted dogging every step of her new life. A tablet a day keeps the voices anyway. Possibly, but the only way to find out for certain was to tough it out and go cold turkey. Seven years of counselling and pill popping didn’t unmake the story that was ‘Bomb Girl.’ The scars were there, just beneath the skin, waiting to be picked at, reopened.

Scabs are a natural part of the healing process. An ugly necessity before the beauty beneath can be revealed.

Ariana snorted. A counsellor had said that to her once. She hadn’t know whether to laugh or cry. She stuffed the phone into her battered leather satchel, before hauling it over her shoulder. The first few days off her medication had been plain smiling, despite a mild, yet persistent neck ache which refused to budge, no matter how often she cracked or massaged it. A small price to pay, though, and a bonus was her skin seemed less greasy and prone to spotty outbreaks.

Every cloud has a silver lining….

But now the ghosts of her past were starting to converge, rather one ghost in particular. Her not so beloved mother. Ariana flung open her room door and made her way out of the halls and along the concourse towards the Students Union at the rear of the main building. She ignored another beep from her bag. Honestly, Tess was so impatient but a godsend, nonetheless. That’s if God existed. A once irrefutable fact and standing fixture in her life which now looked increasingly shaky with every passing day.

‘An untested faith is a useless faith.’

‘Yeah about as useless as all those Christian cliches you shoved down my throat every day,’ she snarled under her breath, earning a curious glance from a male student headed in the opposite direction. Ariana smiled weakly, feeling her cheeks flush with embarrassment. She hurried on, determined to shove the ongoing argument with her dead mother to the far recesses of her mind. Where it rightly belonged. Up ahead, she caught sight of Tess, hopping from one foot to the other like an over excited toddler who needed to use the bathroom. Was she wearing…..a ballgown?

‘Well?? Do you like it?’ Tess spun around, an ocean of pink chiffon fanning out in all directions. ‘I picked it up dirt cheap. Less than £200. I’m going for the Lily Allen look.’

‘Honestly, Ariana. For one with such a theatrical name, you can be an utter bore at times.’

‘One tries.’ Ariana smiled sweetly as Tess grabbed her forearm and proceeded to frogmarch her through the doors of the Union into an already packed bar. ‘Come on,’ she squealed, the jibe at her attire already forgotten. ‘There are cheap drinks to be necked and boys aplenty.’ She momentarily halted and, eyeing Ariana up and down, scrunched her nose in mild disdain.

‘You really should make more of an effort. You could be so pretty if you only tried.’

Tess froze, the crestfallen expression on her friend’s face confirming she had overstepped the mark. ‘Oh God, Ariana, I’m so sorry. You are fine just the way you are. Ignore me, shooting my big fat mouth off as usual without thinking. ‘Friends?’ She affected her most hangdog expression until Ariana could resist no longer, bursting into laughter.

‘Fine. It’s just someone else used to say that to me when I was younger and it brings back crappy memories. And stop calling me Ariana. It’s Rebecca, okay?’

‘But of course, your most excellent Rebeccaness.’ Tess dropped into an exaggerated curtsey, causing the doorman to eye her suspiciously before deciding all was well and allowing them to enter the Union complex.

‘Yes. But I’m your clown.’ Tess fluttered her eyelashes and the two of them were soon subsumed by the scrum of bodies trying to catch the eyes of the besieged bar staff.

‘Two pints of cider,’ screamed Tess, gesticulating wildly with raised digits in the air, while elbowing her way through the throng. Ariana rolled her eyes and offered up apologies to those shoved aside and left in the wake of her friend.

‘Sorry,’ she shouted, struggling to be heard as a beating bass began to reverberate across the cramped dance floor, situated to the right of the bar. ‘She doesn’t get out much.’

Unknown to her, a lean, nondescript male watched from the other side of the dance floor. He raised his pint of Guinness and took a measured sip, savouring the sharp aftertaste. The mad one had turned up looking like a reject from Dancing With The Stars, but nothing surprised him where she was concerned. Adam O’Sullivan smirked for she was nothing more than an embarrassing sideshow which he could dispense with in an instance. He was far more interested in her dowdier companion.

The man began to stride across the dance floor, weaving through the smattering of early revellers submitting to the rhythm and throwing drunken, uncoordinated shapes in a pretence at dancing.

‘Time for you to meet the famous O’Sullivan charm, Ariana.’

Missed out on Chapters 1-3. You can catch up by clicking the links below.

Like my words. Then why not gorge yourself on 130,000 of them. My first novel, ‘The Kirkwood Scott Chronicles: Skelly’s Square,’ is now available to buy on Amazon in e book and paperback format. Just click the link below. Thank you. 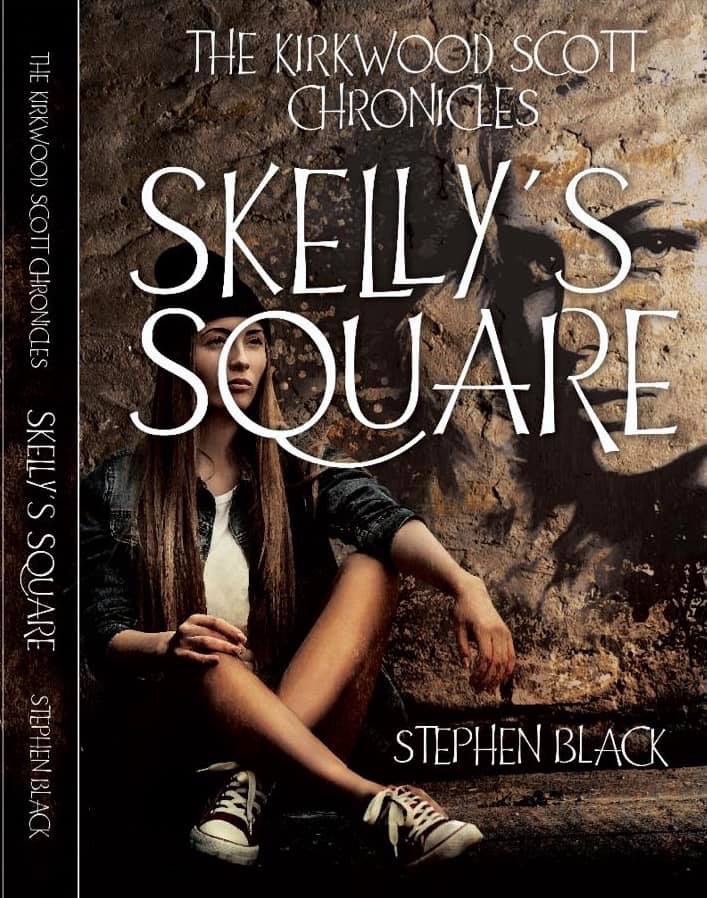 22 thoughts on “A Short Story For You All”