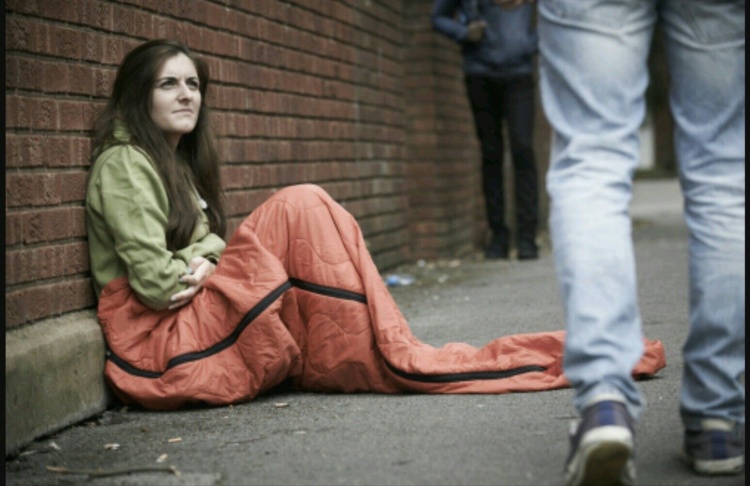 I first met Sasha about a year ago, crumpled in a corner on a city centre street. She struck such a pathetic picture that I couldn’t walk past her and stopped to offer some help. We got talking and I see her most weeks now at various locations about the ‘town’ as Belfast folk refer to it. We’ve built up a friendship of sorts, a level of trust whereby she has began to tell me a little of her past. Bit by bit I am learning her sad story.

Sasha isn’t her real name by the way, for reasons that will become clear later. She was born in Russia but moved to another Eastern European country at an early age. Her father wasn’t on the scene and for reasons I’m still not totally clear on neither was her mother. As such, she was raised by her grandparents. At some point, everything went wrong though and she found herself in Northern Ireland.

Sasha told me she was trafficked to the U.K. to sell drugs and operate as a sex worker. She is slowly unpeeling this layer of her story to me. Another homeless friend of mine, Maggie, told me Sasha used to sell heroin in the park. This surprised me at the time but is now beginning to make more sense. Maggie and Sasha don’t get on. Sasha says Maggie bullies her, Maggie says Sasha is a dealer.

The truth is probably somewhere in between. All I can say is what I see with my own eyes. I’ve never witnessed Sasha selling drugs, although they are rife throughout the city centre. She speaks good English, is intelligent, polite to a fault and has never asked me for anything. I’ve had to force money, drinks and food upon her in the past. She carries herself with pride and dignity.

She has a boyfriend, let’s call him Yuri, but I rarely see him. His pitch is on another street which doesn’t form part of my daily commute to and from work. Her pride and joy is her little black and white dog who is forever at her side. Cynics might say the little girl lost routine and cute dog are all part of the scam, to make mugs like me part with our loose change. Maybe, but I honestly don’t believe this is the case here.

She gets hassled a lot by men on the street. I witnessed such an incident the other day. She politely told the guy, a fellow rough sleeper, to go away but he persevered for some time before stumbling off, clearly under the influence of something. I felt awkward and uncomfortable. Sasha is streetwise, she can fight her own battles, but should I have intervened and said something?

Risked a punch to the head? A knife to the guts? But there I go throwing stereotypes around again. It’s so hard to get to the bottom of these people, you barely scratch the surface. I’ve joked to Sasha about interviewing her for my next book and next time I see her I’m giving her a copy of the first one. She’s a reader and seems intrigued that one of my main characters is a young homeless woman.

Our streets are saturated with such young, lost souls and they all have a story to tell. I can’t help them all but if we all do just a little bit more then we can collectively make a massive difference. So if you pass a Sasha today, or a Maggie or a Yuri stop and talk to them. Ask them how you can help. Even a five minute conversation can make all the difference to them. Show them you care.