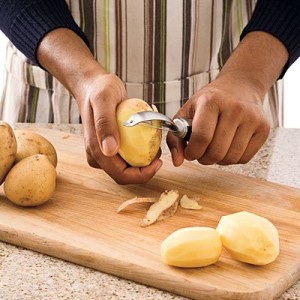 Fionnuala and Rebecca travelled to London at the weekend for a shopping trip as part of the latter’s thirteenth birthday celebrations. They shopped til they dropped as well as taking in all the sights with their cousin, Bronagh. Which left me home alone with Adam, Hannah and a list of instructions as long as my arm from my every helpful wife. The gist of it was feed the kids, clothe the kids and don’t set the house on fire.

Now I’m no domestic god but basic household tasks are not beyond me if shown clearly, very clearly, what to do. I mastered the various buttons and dials on the washing machine, reheated precooked lasagna and fixed curtains, blinds and multiple cushions under the watchful eye of Hannah, who had been put in charge by her mother before leaving. I even remembered to feed Charlie the border terrier, much to his tail wagging relief.

The Everest of the weekend, however, was when Fionnuala asked me to peel the potatoes for Sunday dinner. My efforts at this in the past have been somewhat erratic to say the least. Stephen and sharp knives are not a good mix and the emergency services were on standby in case I nicked an artery. I’m sure it’s a common sight in Sunday A&E departments with ‘home alone’ husbands being wheeled in and out.

The first rule of peeling potatoes is to ensure you are left with more potato than peel at the end of the process. My previous enthusiastic, if somewhat ham fisted, attempts at this have resulted in potatoes the size of marbles which wouldn’t feed a field mouse. Meanwhile the mound of peelings require a crane to excavate to the recycling bin. There’s a reason I didn’t pursue a career in neurosurgery.

The art seems to be in the wrist motion. As you daintily peel you rotate the wrist, the trick being to remove the entire outer skin in one single, fluid motion. I’ve yet to achieve this ‘holy grail’ of kitchen etiquette but my technique has considerably improved in its pursuit. The result was a full pot of edible potatoes more than capable of feeding a family of five.

I’ve been thinking long and hard about this blog lately, where it’s going and the topics I should be writing about. Creative writing is increasingly taking up more of my time and I don’t write about faith matters anymore. Some of my most popular posts have been deeply personal and introspective. But am I revealing too much of myself, peeling away too many layers, leaving myself utterly exposed?

Twitter seems more receptive to the creative side of my writing. I’ve picked up more sales and interest, having tapped into a huge writing community there. My creative posts on WordPress are always amongst my least popular so do I stop posting creative fiction on the blog. If so, what is left for the blog? It’s something which has been nagging away at me in recent weeks to the extent I took a four day break from blogging last week.

As ever I’d be grateful for your comments and feedback. As a writer they fuel my writing and encourage me to keep going. The blogging world has been somewhat flat in recent months. A lot of regular bloggers have drifted away or are posting less frequently. Is this merely a blip or symptomatic of a broader issue? I don’t know. What is do know is that blogging is hard, just like peeling potatoes.